A Brief History of Translation: Part 1

Where did translation start?

It’s impossible to pinpoint one exact moment in history because translation is nearly as old as language and has been happening for thousands of years. Given the antiquity of its origins, we can’t know what’s been lost to time. Thus, we’re dependent on the existing examples of early translation to demonstrate the latest possible beginning of translation. 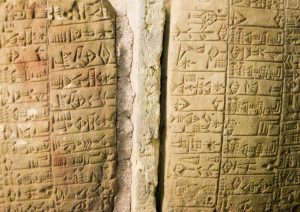 A cunieform tablet of the The Epic of Gilgamesh, the first translation in ancient history

The Epic of Gilgamesh is a poem from Ancient Mesopotamia. It is the oldest literary text in existence to date, and second oldest religious text after the Pyramid Texts.

A collection of five poems about Gilgamesh, King of Uruk during the third dynasty of Ur (c.2100 BC), were written in Sumerian. They then became the basis for the Epic, which was a single document founded on the poems and translated into Akkadian on clay tablets.

The first Arabic translation directly from the original tablets was published in the 1960s by Iraqi linguist, Taha Baqir. The definitive modern English translation is a work by Andrew George, published by OUP in 2003. 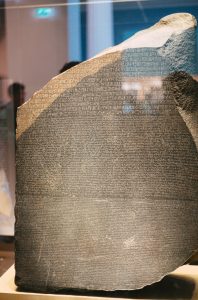 The Rosetta Stone, the most famous ancient translation, was instrumental in modern understanding of translation in history

The Rosetta Stone is a stele – a tall ancient stone or slab erected as a monument, decorated with figures or inscriptions. It bears the same decree written in three different languages: Ancient Egyptian Hieroglyphics at the top, Ancient Egyptian Demotic script in the middle and Ancient Greek at the bottom.

It depicts the decree, issued by a collection of priests gathered at Memphis in March 196 BC, which establishes the divine cult of the ‘new’ ruler, King Ptolemy V Epiphanes.

From what we understand, the stone was moved a few times. Eventually, it ended up as a building material used in Fort Julien some time between its construction in 1470 and its fortification in 1516. When Napoleon’s army occupied the fort in 1799 as part of their campaign in Egypt and Syria, Lieutenant Pierre-François Bouchard discovered the Rosetta stone. Unsurprisingly, the British took the stone and it’s been in the British Museum since.

Although it’s no longer unique, the Rosetta Stone made an invaluable contribution to understanding and translating Ancient Egyptian. It was the first and most significant of its kind. It’s also remarkable for its secular nature, and as representation of the importance of translation in Ancient Egypt. 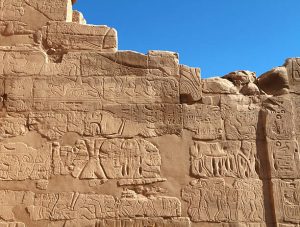 The Ashkelon Wall bears the peace treaty and the Battle of Kadesh, after which the Treaty is named.

Also known as the Egyptian-Hittite Peace Treaty, this is the only Ancient Near East treaty with both sides surviving.

The two-century long war raging between the Egyptians and the Hittites came to a crux at the Battle of Kadesh in 1274 BC, where both sides suffered badly and lost many lives. The Treaty of Kadesh, named for the fruitless battle, didn’t solve the existing animosity, but did conclude the active opposition and it’s the earliest documented peace treaty in existence today.

What are the links between translation and religion? 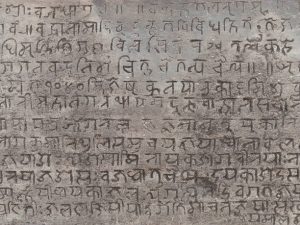 The translation work of Buddhist monks throughout history was central to the spread of Buddhist and the sharing of knowledge.

Buddhist monks played a significant role in translation, both as scholars and in a religious capacity. Records show the monks translating from various languages into Chinese (among others), and as a result, this wave of accessible content was central to the spread of Buddhism across Asia in the first millennium.

The most notable Buddhist monk was Kumārajīva, who translated from Sanskrit into Chinese in the 4th century AD. His most well-known document is undoubtedly the Chinese version of the ‘Diamond Sutra’. It is a significant and influential mahāyāna sūtra in Buddhism, lauded for its clear portrayal of the meaning over literal translation. A copy of the Diamond Sutra dated 868 is “the earliest complete survival of a printed book”.

Buddhist texts were translated on a new scale during the Tangut Empire. The Tangut people were Tibeto-Burman and lived in northwest China, forming an imperial dynasty from 1038 to 1227 AD. They used block printing to translate many volumes, which made the process decades quicker, as well as having support from a wide range of resources and people, as a result of government endorsement. 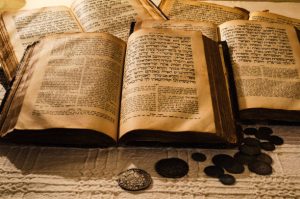 A key part of Jewish history: the old Hebrew Bible was translated into Koine Greek so it was more accessible to Jews everywhere.

With Jews scattered across the world not being exposed to Hebrew, translating the Hebrew bible made it more widely accessible to the Jewish faithful.

The translation from Hebrew to early Koine Greek in the 3rd century BC became known as the Septaguint, due to the fact that it was worked on by 70 translators.

The document was the first major translation that we’re aware of in the Western world and became the basis of future Bible translations that followed in multiple languages. 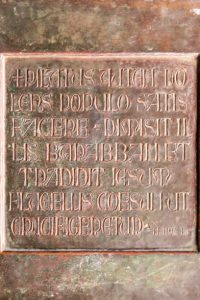 This plate is engraved with a verse from Mark 15:15 in Vulgate Latin. The Vulgate was the most influential contributor to modern Christian factions in history.

Initially, Latin translations of the Bible – Vetus Latina – used the Septaguint as a sole basis.

Enter Saint Jerome. Patron Saint of translators, librarians and encyclopaedists, he made a longstanding impact on translation and Christianity that remains relevant today.

Jerome’s translation of the Bible between 383 and 404 AD set it apart for two reasons. Firstly, Jerome’s translation from Ancient Greek was informed by his ability to cross reference the original Hebrew document too, adapting for accuracy. Secondly, it was translated into vulgar Latin, the Latin of the people, which is why it’s known as the Vulgate. The Vulgate is the version of the Bible used by the Catholic Church.

The need for more widespread translation of the Bible continued to grow with the dawn of Protestantism in the early 16th century. The significant difference between the Catholic Vulgate and the documents translated for Protestantism lie within the disparity between critical passages – an issue that remains outstanding today.

Steeped in traditionalism and conservatism, religious translation advocated firmly and unequivocally for word for word translation in order to properly represent ‘the word of god’. Because this was a stance supported by rulers, leaders and high priests, it was the standard – and safest – form of translation for some time.

Founded in academia and progression and developed from an understanding borne of proximity to regular people, some academics and translators favoured translation that recorded a viable interpretation of the source. This intended that everyone could understand ‘the divine word’ but was branded ‘profane’ for its flexibility from the source.

A Brief History of Translation: Part 2